Ricky, (his name may have been changed to protect his true identity) a male Shar pei from Maryland was seen at our hospital in Chester, PA  with a severe long term ear infection in both ears. The ear canals, which are “L” shaped, do not allow air to dry the canals nor allow fluid to escape once the canals begin to close down due to infection.
Ricky had severe discomfort, smelly ears, and was very afraid of even being touched. He could only be examined with a little sedation.


The medical term for Ricky’s condition is called Otitis externa or an inflammation of the ear canal.
This occurs when the lining of the ear becomes inflamed and thickened, thereby blocking air and fluid flow in and out of the canal. Animals with otitis externa can also develop otitis media (middle ear inflammation).

In puppies and kittens, otitis externa is often caused by ear mites. These tiny parasites cause terrible itching and a thick brown discharge. In adult dogs, the most common underlying cause is allergies- sensitivity to something in the environment or to food. In older animals, tumors can cause blockage of the ear canal and secondary infection.   Other predisposing causes may include foreign bodies (such as grass seeds), or small ear canals (often seen in Shar Pei) or long floppy ear flaps (for example, Basset hounds) that prevent air flow.


Dogs with otitis externa may start out with mild signs, but symptoms can progress with time or from failed treatment attempts, such as:

Because the condition is painful, particularly when the middle ear is affected, pets may have personality and behavioral changes. They may shy away from being petted on the head, and may be uncomfortable opening their mouth wide or chewing food. Additionally, blockage of the ear canal muffles their hearing and makes them less responsive to their owners.


In Ricky’s case, we obtained samples of the discharge, did a culture & sensitivity and decided what antibiotics to put him on. Additionally, we added multiple Cold Laser Therapy sessions to make Ricky more comfortable and possibly open the ear canals prior to the planned surgery.


Medical management is sufficient and preferred in pets that have inflammation and discharge of the ear canals, but no blockage. The ear canals are cleaned and flushed, and your veterinarian may even need to drain the middle ear to relieve the fluid buildup. Pets are treated with a medication that kills mites, bacteria, or yeast, depending on what type of organism is found in the canal. In Ricky's case, just medical treatment was not enough. He needed a Lateral Ear Resection. Picture a cylinder pipe with only one end open. Now picture the pipe full of moisture and dirt. The only way to dry the pipe out and have access to the inside of the pipe is if you cut the pipe open length-wise.  Now air can dry the pipe and you can get a cloth onto the entire pipe to clean it out. This is what we did for Ricky's ear canals.


Opening the lateral and vertical part of the ear canal opens it up to air and the owners     accessibility in cleaning the canal. 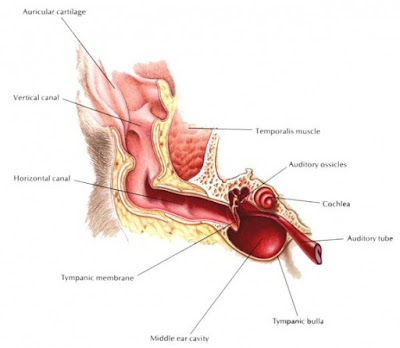 Ricky had his Zepp procedure today and did very well. Just the vertical canal was     opened. In a few months, we will assess Ricky's actual progress.


Owners of certain breeds of dogs, such as Cocker spaniels, Shar Pei, and Bassett hounds should be prepared for ear problems.   These dogs should have their ears checked once or twice a year, and any ear infections should be treated promptly to prevent inflammation and thickening of the canal. Any dogs prone to skin or food allergies should also be checked annually.