Ticks and Why They Can Hurt Your Pet.

Ticks are usually active in the spring, summer, and fall; however, the adults of some species are active even in the winter. We did an experiment last year. We took a tick from one of our patients and put the tick in the freezer in November. In March, we took it out to see what happened to the tick. In ten minutes, it was crawling away.

Tick carry disease that can be transmitted to dogs and cats. This blog will concentrate mostly on the dog in this issue.
Some general or universal clinical signs that can be associated with  tick disease are the following:
1. Fever
Dogs suffering from severe tick bite may have its body temperature rise rapidly.
2. Loss of appetite
Sick dogs can’t eat much. If you notice that your dog is barely touching its food, it definitely is sick. Take it to the veterinarian right away for proper diagnosis.

Ticks can bring about soreness in the limbs area and almost anywhere else in the body.
4. Skin infections
Aside from soreness and swelling, skin infections are also apparent on dogs infested with ticks.
5. Lethargy
Dogs that are less active than normal might be an indication that they’re suffering from something. Always check your dog for fleas, ticks, and other health concerns every time it feels lethargic.

Arthritis can be a symptom of tick-related diseases too. Ticks can invade the body of your dog and then localize themselves in the joint area. As a result, your dog's joints can become inflamed and swollen.
7. Abnormal changes in the blood count
While this symptom is fairly hard to detect at home, the veterinarian can check for it.
If you see any of these symptoms in your pet, it is best that you take it to the vet right away for proper diagnosis. A lot of pet owners mistakenly think that dog ticks are not serious health concerns. Keep in mind that dog ticks can lower your dog’s immune system, thus making its entire body exposed to a host of other diseases.
Some specific diseases that ticks can transmit are:

Lyme Disease in Dogs
Lyme disease is caused by the bacterium Borrelia burgdorferi and is transmitted by the deer tick (often referred to as the black-legged tick). Signs of Lyme disease in dogs are difficult to detect, and warning signs may not appear until several months after infection. Signs may come and go and can mimic other conditions. Cases vary from mild to severe. In severe cases of Lyme disease, kidney failure can occur.
Most common signs of Lyme disease:
Canine Ehrlichiosis
Canine Ehrlichiosis is caused by the bacterium Ehrlichia canis and Erlichia ewingii. Ehrlichia canis is transmitted by the brown dog tick and Ehrlichia ewingii is transmitted by the lone star tick. Like Lyme disease in dogs, warning signs may not be readily apparent. If left untreated, this disease could progress to a chronic infection without clinical signs, which can last days, months or years.
Mild signs appear to mimic a vague illness, the most obvious sign of which is weight loss. Severe cases of canine ehrlichiosis that go undiagnosed and untreated can end in death.
Most common signs of canine ehrlichiosis :
Canine Anaplasmosis
Sometimes referred to as dog fever, or dog tick fever, canine anaplasmosis is caused by the bacteria Anaplasma phagocytophilum or is transmitted by the deer tick (often referred to as the black-legged tick)—the same tick that transmits Lyme disease. Another form of canine anaplasmosis is caused by the Anaplasma platys bacterium carried by the brown dog tick. Although these two forms of anaplasmosis present with different signs, both may pose a serious threat to your dog's health.
Most common signs of canine anaplasmosis:
Rocky Mountain Spotted Fever
Rocky Mountain spotted fever in dogs is caused by the bacterium Rickettsia rickettsii and transmitted by the American dog tick, the wood tick and the lone star tick. In most cases, Rocky Mountain spotted fever in dogs lasts about two weeks, but in severe cases it can result in death.
Most common signs of Rocky Mountain spotted fever:
By no means is this a complete list of tick transmitted diseases. It is representative of diseases your pet and did I mention human beings can get? Yes, humans can get these diseases too.
Be on the lookout for ticks when your pet comes inside and also when you are out for a hike or gardening. Have someone check your body for ticks that can attach to your body.
At Providence Veterinary Hospital, we recommend the following products for tick control on your dog or cat and in the home: 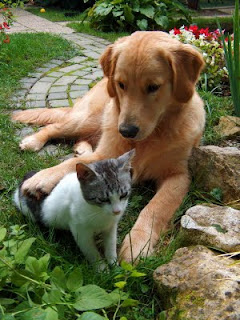 Email ThisBlogThis!Share to TwitterShare to FacebookShare to Pinterest
Labels: Ticks and Disease