Ticks and Every Reason To Protect Yourself And Your Pet

It's Spring! Well, at least it is Spring on the calendar. Ticks don't use calendars. They are out and feeding on warm blooded mammals when the temperature goes much above 40 degrees Fahrenheit. 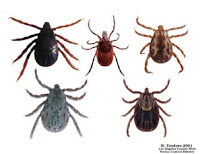 When you or your dog are out enjoying the early Spring weather, be assured that there are tick out too. They are looking for you and your dog!


Ticks are parasites that attach themselves to dogs, feed on blood and transmit diseases directly into the dog’s system. Major tick-borne diseases transmitted to dogs in the United States include:


• Lyme disease, which comes from the deer tick, can cause stiffness, lameness, swollen joints, loss of appetite, fever and fatigue. Your dog may not show signs of the disease until several months after infected.


• Canine Ehrlichiosis, found worldwide, is the most common and one of the most dangerous tick-borne disease organisms known to infect dogs. Caused by the brown dog tick, symptoms may not surface for months after transmission, and can include fever, loss of appetite, depression, weight loss, runny eyes and nose, nose bleeds and swollen limbs.


• Canine Anaplasmosis, also called dog fever or dog tick fever, is transmitted from the deer tick. Symptoms are similar to other tick diseases including fever, loss of appetite, stiff joints and lethargy, but also can include vomiting, diarrhea. In extreme cases, dogs may suffer seizures. 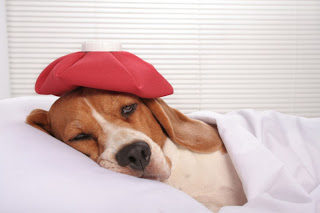 
• Canine Babesiosis is typically transmitted by the American dog tick and the brown dog tick. Causing anemia, symptoms may also include pale gums, weakness and vomiting.


• Canine Bartonellosis comes from the brown dog tick. Symptoms are intermittent lameness and fever. Left untreated, this disease can result in heart or liver disease.


• Canine Hepatozoonosis is thought to be transmitted by the brown dog tick and Gulf Coast ticks. Your dog can be infected if he eats one of these disease-carrying ticks. Symptoms are fever, runny eyes and nose, muscle pain and diarrhea with the presence of blood.

Not all diseases mentioned here, occur in all parts of the USA.
Prevention & Screening
The three most important actions you can take to prevent ticks are:
1.  Use a Preventic collar every 90 days. Put the date on the inside of the collar so you can remember to  change it. You can also post it in Outlook or your favorite reminder system.
2.  Use a reliable tick prevention product on your dog. Usually, the ones sold by veterinarians work much better than over-the counter products. We use Parastar Plus in the hospital and recommend it.
3. Use Knockout Area Spray in your home every 30 days.
Screening test can be done at your veterinarian during and annual wellness exam for your dog. The one we rely on is the 4DX test which screens for Lyme, Ehrlichiosis, and Anaplasmosis. In addition, it screens for +heartworm disease (see blog for March, 2011)
To confirm a positive finding, a second, more detailed test is sent to a lab before treatment. Those tests could be a Quant C6 for Lyme disease or a Western Blot test.
Symptoms of Tick Borne Disease
Listed below are many symptoms. No patient will have all these clinical signs. My purpose is to alert you that a tick borne disease may be involved. Only you veterinarian will be able to confirm your suspicions.


Removing Ticks From You Dog

Do not use alcohol, nail polish, hot matches, petroleum jelly, or other methods to remove ticks. These methods may actually traumatize ticks causing them to regurgitate their gut contents. Essentially, you don't want to do anything to make the tick expel its gut contents into the individual or animal--this greatly increases the chance for infective organisms to be transmitted. You also don't want to crush the tick after removal and get the contents of a potentially infected tick on your hands. 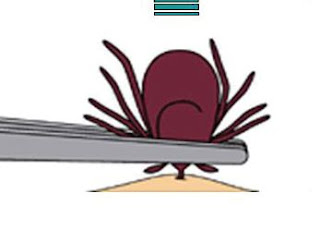 The recommended way to remove an attached tick:
Hope this information helps. Don't get bit!